skip to main | skip to sidebar

The "Mystery" of the English Expeditionary Force in 1674

The following is in support of a post on the Wars of Louis Quatorze blog, in which I am a participant. I did not want to bore casual readers with this much minutia, so posted it here with appropriate links on the other site.

583. HEPBURN, Scottish. —Got up March 6 1633 by John Hepburn, says the colonel HEBRON. Arrive in the month of August to Boulogne, strong of 2.000 men, good soldiers, the pluspart gentlemen. Year of Lorraine, sit Nancy. Taken of Haguenau, Saverne, Lunéville, Bitche and the Mothe, helps Heidelberg and Philisbourg in 1634. Taken of Spire, fights Fresche, taken of Bingen, helps Mayence, taken of Two Bridges, fights Vau- drevange in 1635. Sit Saverne in 1636; the colonel there is killed. Given July 20 1636 to Jacques, count of DOUGLAS. Taken deBlamont and of Rambervilliers. Taken of Yvoy and of Damvilliers in 1637. Sit Holy omer and of Renti in 1638. Sit Hesdin in 1639. Sit Arras in 1640. Sit Area and Bapaume in 1641. Army of Italy in 1642. Sit Trino in 1643. Army of Picardie in 1644, sit Gravelines. Sit Cassel, Mardyk, Bourbourg Bélhune and Holy Coming in 1645. The colonel Douglas, killed October 21 1645 in battle of Al- ving, close to Douai,est replaced by one of its brothers. Army of Guyenne in 1650. Army of Picardie in 1653. Donnéenl655à Georges Douglas deDumbarton, marquis of Douglas. Taken of Landrecies, condéetsaint-ghislain in 1655. Sit Valenciennes in 1656. Sit Mount- médy in 1657. Battle of the Dunes, taken of Dunkerque and Ypres in 1658. Country of Lorraine in 1663. Country of Flanders in 1667. Country of Frank County in 1668. Country of Holland in 1672. Sit Maëstrichl in 1673. Battles of Sintzheim, Ensheim and Mulhausen in 1674. Fights Turckheim and of Alten- heimen 1675. Fights Kokersberg in 1676. Taken of Fribourg in 1677. Left June 27 1678 for England, where it flgure again in the British army under the name of Royal Scotsman.

The load of general colonel of the Scottish infantry, created August 11 1643 in favor of Jacques of Swindle, ferté-imbaut marshal, was eliminated May 20 1668.

963. Irish ROYAL. — Created January 6 1657 and formed to the Charité-sur-Loire, by Jacques, knight of Arcy, with the debris of several bodies More irish, More scottish and More english. Incorporated following March 22 with the regiment of the duke of York.

“The Life of John Churchill To The Accession of Queen Anne”

Link to "The Life of John Churchill"

CHAPTER XIX, CAMPAIGN OF 1674. THE BATTLE OF ENTZHEIM

Although Charles had been forced by his people to make peace with Holland, he had no intention of breaking with his paymaster, the King of France. Parliament insisted upon the reduction of the army, and even threatened to disband the Guards. To avoid further discussion of the question, the King promised to send the Irish regiments back to Ireland, and said that he had already given orders to disband the Horse and Foot he had raised for the Dutch war. This, when carried out, reduced the strength of the army in England to about 6,000 men.*

In the treaty with Holland, it had been privately stipulated, that the British regiments in the French service should be allowed to die out by stopping the supply of recruits, and leave had been given to the Dutch to raise troops in England.

Charles failed to carry out the first part of this engagement, for not only did he still encourage recruits to enlist in those regiments, but he actually pressed men for that purpose. The British troops remaining in the French service, were Monmouth's Regiment of Horse, and one Scotch and one English brigade of Foot.* Thus, the campaign of 1674 exhibited the unpleasant spectacle of British soldiers fighting one against the other in the ranks of the two contending forces by order of their Sovereign. But what did he care?

During this winter, King Charles asked his friend Louis to appoint Churchill to be Colonel of the Regiment of English Foot which, by a private arrangement between the two monarchs, was to be regularly taken into the French service. In a correspondence on the subject, Louvois refers to Churchill as too much devoted to pleasure for this position. A man was wanted, Louvois said, who would give as much attention to the regiment as a lover would to his mistress. Churchill went to Paris in March to urge his case, and was presented at Court by the English Ambassador, who also pressed upon the French Minister of War the request of King Charles. The request was granted, and in April Churchill became Colonel of the "Royal English Regiment", vice Lord Peterborough, resigned.* The nucleus of “Churchill's' Regiment”, as it was thenceforward called, had been formed by drafts of fifty men from each of the three companies of the Foot Guards before their return home from Holland. t

* Of these, the Royal Scots is now the sole representative in our army. Sir George Hamilton's, Churchill's and Monmouth's regiments of Foot formed part of these two brigades. Colonel N. Littleton commanded Monmouth's Regiment of Foot, which was disbanded in 1697.

t See letters of if 3, 1674, and of §] 3, 1674, from the English Ambassador, Sir William Loekard, at p. 87 of ' Lord Stanhope's Miscellanies,i and F. O. State Papers, No. 289, 1674—Rolls Office. Marlborough's commission as Colonel of this regiment is still in existence. It is signed by Louis and countersigned by Tellier, War Office Entry Book, No. 612A—now in Rolls Office. This regiment was disbanded in 1697.

The following maps and illustrations are all from the Marburg Digital Archive, here.

French Order of Battle with Regiment and Commanders Names Before Strasbourg, September 24, 1674. From Marburg Digital Archive. 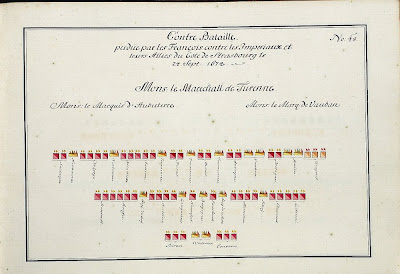 Deployment of both sides near Strasbourg prior to the Battle of Enzheim, late September, 1674 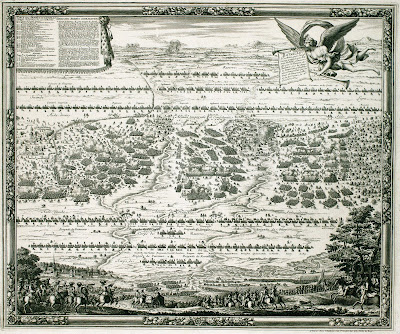 The specific deployment for the Battle of Enzheim, another view, October 4, 1674 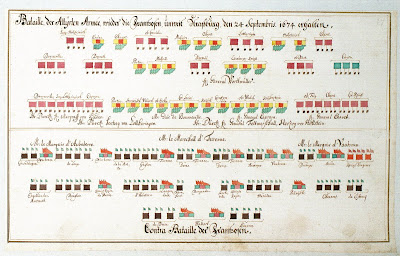 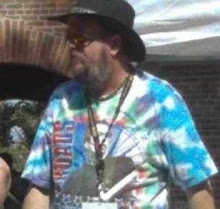 Sir William travels among the masses, secure in his disguise as a member of a troupe of itinerant traveling musician's.

A Few Of My Favorite Links

A Little About Myself...

I am an "Old School Gamer" with 20+ years experience, who has been in self-imposed seclution for the last 16 years. I have now returned to the fold, but with a different sense of purpose. I was once one of the dreaded "Tourney Pro's", driving and flying about the southwestern United States organizing, umpiring, and playing in Ancient and Pike & Shot tournaments. I probably was somewhat responsible for a lot of new gamer's entering the hobby, but I then allowed these very gamer's to drive me away from it. I realized that many of them had no real interest in the history, the research, or the "pomp and circumstance" that I considered a necessary part of "MY" hobby. No more. Now I march to a different drummer, game in the periods that interest me, do my own research, and focus on the things that give me pleasure.

As I delve into other gaming periods (I have armies under construction in 3 scales and 5 periods), I may reference those here as well, or at least provide links to specific blogs regarding those era's and armies. I do intend to put on demo games at local Con's and at the local library, and hope to start to grow a core group of like-minded individuals who will join me in this Great Adventure.